We are your
one stop shop
for all your essential items !

From Our Family to yours 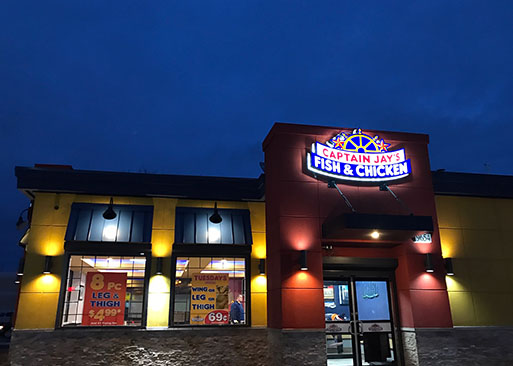 Captain Jay’s Fish & Chicken is dedicated to bringing local neighborhoods the freshest fish and chicken in the market. With YOU BUY, WE FRY®, we are distinguished from other institutions deemed as fast food. We offer a variety of grain foods, dairy products, vegetables, produce, fresh seafood, fresh shrimp, and fresh poultry in our markets.

Captain Jay’s was founded in 2003 by a man with a vision. Captain Jay’s is not a fast-food chain, it is a one stop shop where you can swing by and buy dinner for your family and pick up a gallon of milk or carton of eggs. It’s perfect and convenient for you! Captain Jay’s is based on the American concepts of the pursuit of happiness, hard work and integrity. Bringing together the delicious southern Cajun recipes, the crisp west coast’s freshness and quality, the swift east coast’s speed and efficiency, and the pure mid-west’s heart and amicability is what distinguishes Captain Jay’s from any other establishment. Captain Jay’s began in Detroit, Michigan and has quickly gained recognition and popularity for its Cajun chicken recipe, zesty fries, fresh seafood and shrimp in addition to their home-styled sides like Mac & Cheese, and okra. Over the last decade, Captain Jay’s has expanded to include over twenty locations spread throughout Metro Detroit, and Grand Rapids.